Coronavirus: Fearing the known with an unknown resolution date 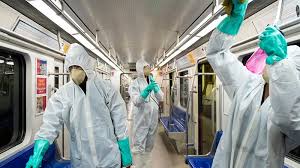 ·         COVID-19 continues to spread inside and outside China, with new cases accelerating
outside China.

·         COVID-19 will likely have a bigger impact than the Severe Acute Respiratory Syndrome
(SARS) outbreak.

·         We have reached stage two – financial disruptions of the impact channels.

·         We will not reach the bottom until a vaccine is found or the pace of new infections and
deaths stabilises.

The COVID-19 death toll has increased to 2 873 at 1 March 2020 in China alone, and 104 outside China, since the virus was first reported in Wuhan in early December 2019. Newly confirmed cases continue to rise, though they are fast declining in China and increasing rapidly outside China. To date, 55 countries have reported new cases of the virus. While the origin of the virus remains unknown, the economic impact is starting to show up in the disruption of global value chains and markets.

Companies have issued precautionary warnings to investors because of the impact the virus will have on earnings. Equity markets sold off across the board at the end of February 2020. Talks that the virus could send the global economy into recession have started and will likely continue.

It is both a demand- and supply-side economic shock

1.       The various estimates of the impact of the virus, which are coming from many economists and market pundits, are guesses based on the 2002/2003 outbreak of the SARS virus that killed 774 people worldwide. The economic impact of the SARS outbreak was smaller than expected and it was mostly confined to China. Economic growth in China slowed down to 9.1% in 2003 from just over 11% in 2002. The global health impact was contained relatively quickly and it did not spark widespread fear or quarantine episodes.

2.       Nearly 20 years later, the COVID-19 outbreak happens when China’s economy is deeply transformed and integrated into global high-value manufacturing and services value chains. At around US$15 trillion, China’s GDP is more than ten times bigger than it was back in 2002. China is linked to many developed economies through technology, services companies, the supply of raw materials and manufactured products. This pun is not intended: if China sneezes, everybody catches the cold.

3.       The COVID-19 outbreak was initially expected to impact the supply side of the economy because of factory closures in China which disrupted the global supply chains. However, the quarantining and restriction of people’s movements has impacted the demand side as well. As a result, companies will at some point stop paying people the longer they remain non-operational, which will further impact the demand side. The problems are now being felt on the demand and supply side.

Many analysts have likened the market impact of COVID-19 to the 2002/2003 SARS outbreak, and more recently the Saudi Arabia oil refinery bombing as well as the killing of the Iran Army General, Qassem Suleimani. In all these cases, analysts assumed that the market impact would be transitory and localised, and that a solution would be found quickly. This time, COVID-19 is proving to be different.

How big a problem is this?

According to official statistics, 88 200 people have been infected with the virus since its outbreak in December. At 1 March 2020, 2 977 people have died globally, with 124 of these deaths outside China. While the death rate in China remains low and newly reported cases stabilising, there’s still some level of mistrust with the numbers coming out of China. This is supported by the aggressive response of the Chinese authorities to the virus. They recently built a 1 000-bed hospital in ten days and quarantined an entire city with 11 million people. This indicates the seriousness of the outbreak. For a long time, Chinese statistics in general have been accused of being doctored. In this case, a disclaimer should be warranted up front.

Although economists are knowledgeable and well trained in the analysis of how the economy works and how one aspect of the economy impacts others, they are not trained to analyse the spread of diseases and its impact on population dynamics. Given the uncertainty surrounding the exact situation in China, in part due to the mistrust of the data and how fast the infections are spreading outside China, there is uncertainty on how big the impact of the coronavirus will be on economic growth or on markets. We consider various factors at play and what it means for real economic growth and market behaviour.

Can central banks or fiscal policy help? The monetary or fiscal stimulus will likely prove limited as long as movement remains restricted. Fiscal policy can help by spending more on health-related issues, which should relax restrictions of movement eventually. Only then can monetary policy come to the party in a useful way.

That said, for the market, we are likely to see the biggest coordinated stimulus in many years out of Asia as countries respond to the virus. This will once again result in asset price inflation rather than inflation in the real economy. But the risk is that the spread of the virus might last longer, in which case, markets will likely fall to validate the weak economy. There’s just no way of predicting how this will unfold. Suffice to say, the longer it remains unsolved the bigger the impact.

We have reached stage two – financial disruptions, of the impact channels

There are three stages of impact:

3.       Stage 3: Formation of the bottom – financial markets first then the real economy. The underlying issue needs addressing, which is the virus. So far this remains unsolved. Market trading technicals can’t stabilise in the face of negative news.

So far central banks have resisted to cut rates but they have promised to act if the situation remains unsolved. Central banks can help with addressing liquidity, particularly in the interbank markets. The risk will remain in corporates which have increased their debt levels in the past decade. We believe that central banks will eventually cut rates because markets will be dysfunctional if the risk off trade continues.

This will likely be followed by the biggest stimulus package (both monetary and fiscal policies) out of Asia and the G7 countries. In fact, the G7 countries had an emergency meeting on Tuesday where they committed to act if necessary. The US Fed has just slashed its policy rates by 50 basis points. More central banks will follow suit.

Markets rally when central banks worry. This is the first sign that central banks are worrying and have started to act. That said, cutting rates will not solve the fundamental problem, which is that the COVID-19 continues to spread and the vaccine remains elusive.