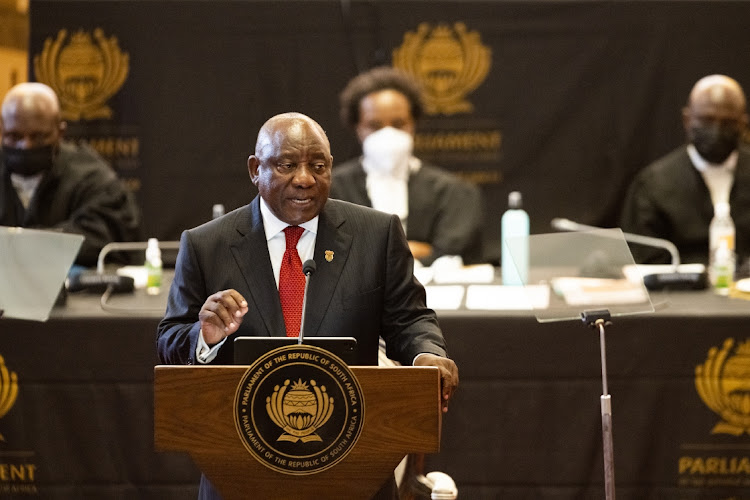 The government achieved three important targets set out in 2020, but the delays and failures of the remaining 23 were glossed over and simply restated with new target dates, in some instances with no specific timelines

The state of the nation address (Sona) is supposed to give a detailed account and an objective assessment of where the country is socially and economically.

It must begin with providing a report back of what was promised during the previous year’s Sona, what was achieved, where were the failures, what caused them, and what actions will be taken so the failures can be rectified in the coming year. Following that, new goals and actions for the coming year are announced, with the role players who will initiate them.

In many respects, this year’s address achieved this, and showed the president’s belief on what the role of the state must be, but still comes up short in bold decision-making.

Last year’s address put forward four overriding priorities: defeating the coronavirus pandemic; accelerating economic recovery; implementing economic reforms to create sustainable jobs and drive inclusive growth; and fighting corruption and strengthening the state. None of these could ever be one-year goals. However, there has been a mixed performance.

Of 26 actions from last year only three have been completed on time, about 10 are still on track, eight have challenges and five have missed the deadline.

These successes were highlighted by President Cyril Ramaphosa, but the delays and failures were glossed over and simply restated with new target dates, in some instances with no specific timelines.

On the success, the Transnet National Port Authority has been corporatised, embedded power generation was increased from 1MW to 100MW in a move that showed boldness, and municipalities have been enabled procure power from independent power producers. These are important, but the remaining action items is where the impact will come from.

Potentially the most consequential is the unbundling of Eskom into three entities — generation, distribution, and transmission — and improving its energy availability factor above 70%. Load-shedding will still feature in this year.

However, the president confirmed a list of pipeline projects in renewable energy, gas, and battery storage with a combined capacity of about 12,700MW. The timelines extend beyond 2023.

On road, rail, and ports network infrastructure, Transnet has begun work on improving port efficiency to reduce congestion along the container corridor linking Durban harbour to Ngqura, northeast of Gqeberha, and Johannesburg City Deep and other key regions.

The Independent Communications Authority of SA (Icasa) will soon begin the spectrum auctioning process, while government will continue to subsidise low-income households in moving to digital from analogue.

The review of the policy framework and processes for work visas, expanding waivers and visa recognition systems and implementing the e-Visa system to 14 countries, all by the end of the first quarter of 2022, are on track. The e-Visa system has been implemented for China, India, Kenya, and Nigeria, with the remaining scheduled for the end of March.

The recently published Critical Skills List, although late, clarifies an area that has been contentious and will provide certainty for skilled foreign nationals who want to work in the country, and for businesses that need critical skills.

There are many other reforms that remain unresolved which the president pronounced on.

However, the central message was about the economy and what it must deliver to people, which is employment, reduction of poverty and inequality. For the first time, with 59-million South Africans watching, the president said what we have always said, that government’s job is not to create jobs. Even if it wanted to, its ability is limited. Its job is to create a conducive environment for entrepreneurs and businesspeople to start and run successful businesses that can employ people on a more sustainable basis.

I am sure this did not sit well with some of the president’s colleagues but it’s a fact of any successful country.

Within that focus on the economy, Transnet, water infrastructure, network infrastructure, land reform, stopping the sabotage to public infrastructure, and bringing to book those who participated in state capture were areas where continued implementation was promised. All well on paper but actions will affirm intent.

Lastly, given the limited understanding of the fiscal implications of the basic income grant (BIG), the president listened to his advisers and many of us who pointed out the risks of a BIG without a permanent revenue source that does not choke growth. More work still needs to be done on BIG.

The president went against the sensational supporters of BIG, rightly so because its economic implications are poorly understood while the political benefits at the polls have been amplified.

We need more of this evidence-based policy, not ideology or fearmongering.